It was surreal speaking English with peers from the US again. Eric and Morgan of SV Zephyr, a 55’ Outremer performance catamaran, welcomed me aboard with open arms and lots of good food. I first met the young couple when we were resting in La Paz, Baja Mexico after the Baja Ha-Ha rally.  We were a few of the handful of younger sailors in the 150 boat race. We met up later in La Cruz, north of Puerto Vallarta, Mexico when we were getting ready to cross the Pacific. They invited me to help race Zephyr in a four day regatta, which we won! We had a ton of fun racing together, it was my first time on a large catamaran, it was an incredibly smooth ride even at high speeds and didn’t heel to one side like monohull sailboats do. I’d already committed to crossing the Pacific with SV Rapture, so Eric and Morgan said I could join them later in French Polynesia, if I wanted to, and continue on with them to New Zealand.

Their gregarious friend John was onboard when they picked me up in Apataki.  He flew in to visit for two weeks to enjoy a much needed break from his fast-paced Silicon Valley life. It was a stark contrast to my solitude and quiet life on the rainbow boat, and a much needed change of pace. I had my own cabin for a few days before I happily gave it up to CJ and River. They are a sailboat cruiser couple who I’d met in Mexico too. CJ is always joking around, a lioness foil to River’s calm, quiet nature.  They bought Eric’s first boat, a monohull, and have been friends with him ever since.  At night, I cozied up happily on the couch like a cat rejuvenating after a time out in the wild.  If felt relaxing to sleep on a boat in the ocean again.

We arrived in Rangiroa, a popular tourist atoll and the last main jumping off point to sail from the Tuamoto island group to Tahiti.  We provisioned, spied on the folks staying in luxe over ocean bungalows and snorkeled in the aquatic park. The park had underwater signs explaining how coral grows and what type of fish live in the area, just like signs in a land park.  It was unique, but also shows how many people visit the area regularly.  I was ready to leave after two days. 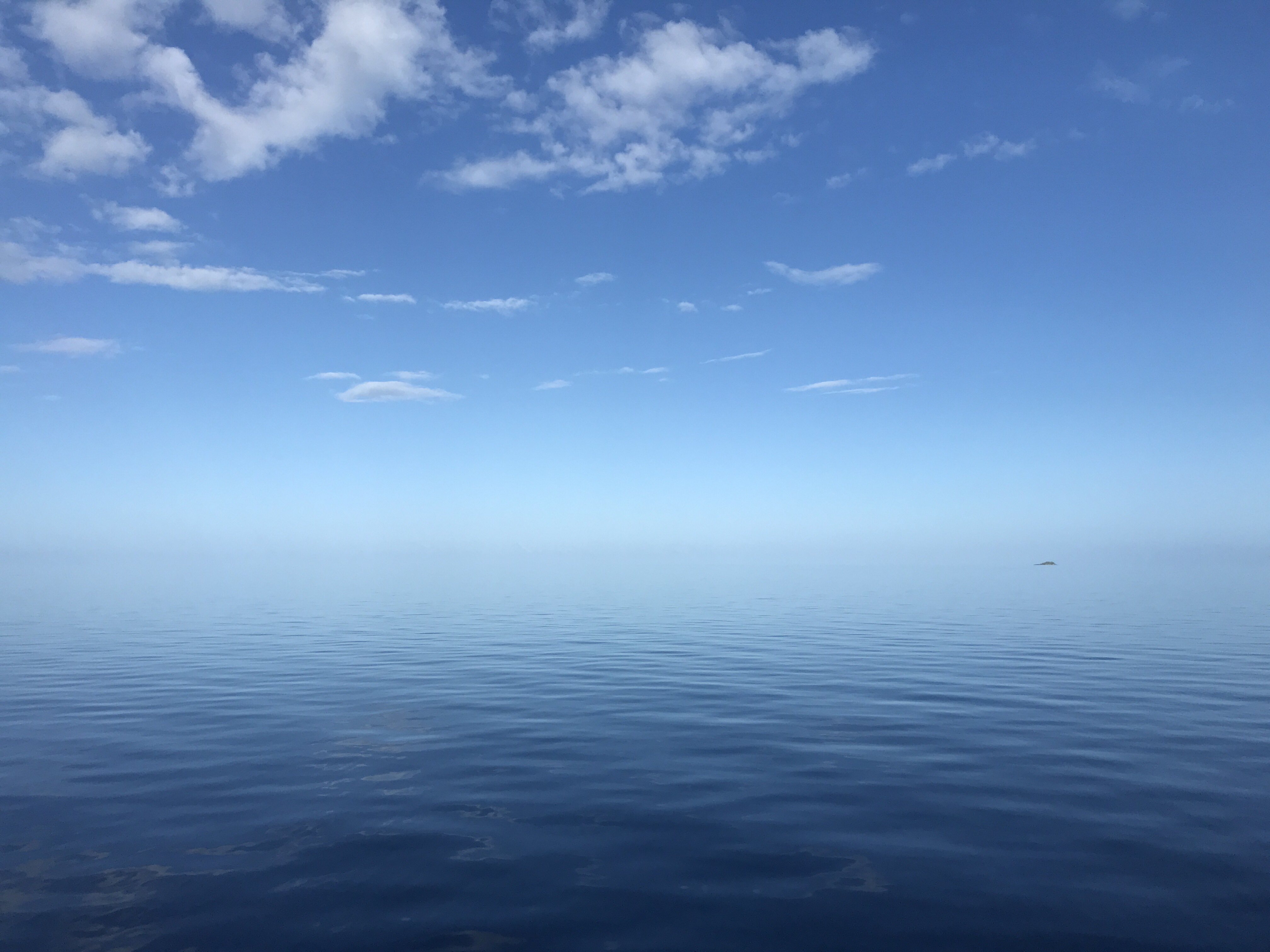 On a windless morning, we motored stealthily across the mirror surfaced inner sea heading for the Blue Lagoon, on the other side of the oblong Rangiroa atoll. Reef sharks circled Zephyr as we cruised over crystal water revealing coral heads below. The Blue Lagoon was incredibly beautiful, a mile across and shallow, connected on one edge to the inner sea we were motoring through, like a small bubble adjoined to its parent bubble atoll.  Island chunks bordered the turquoise lagoon, protecting it from the open ocean and hosting all kinds of palm trees and birds. These palms weren’t cultivated for coconut production so it had a more natural, wild feel. 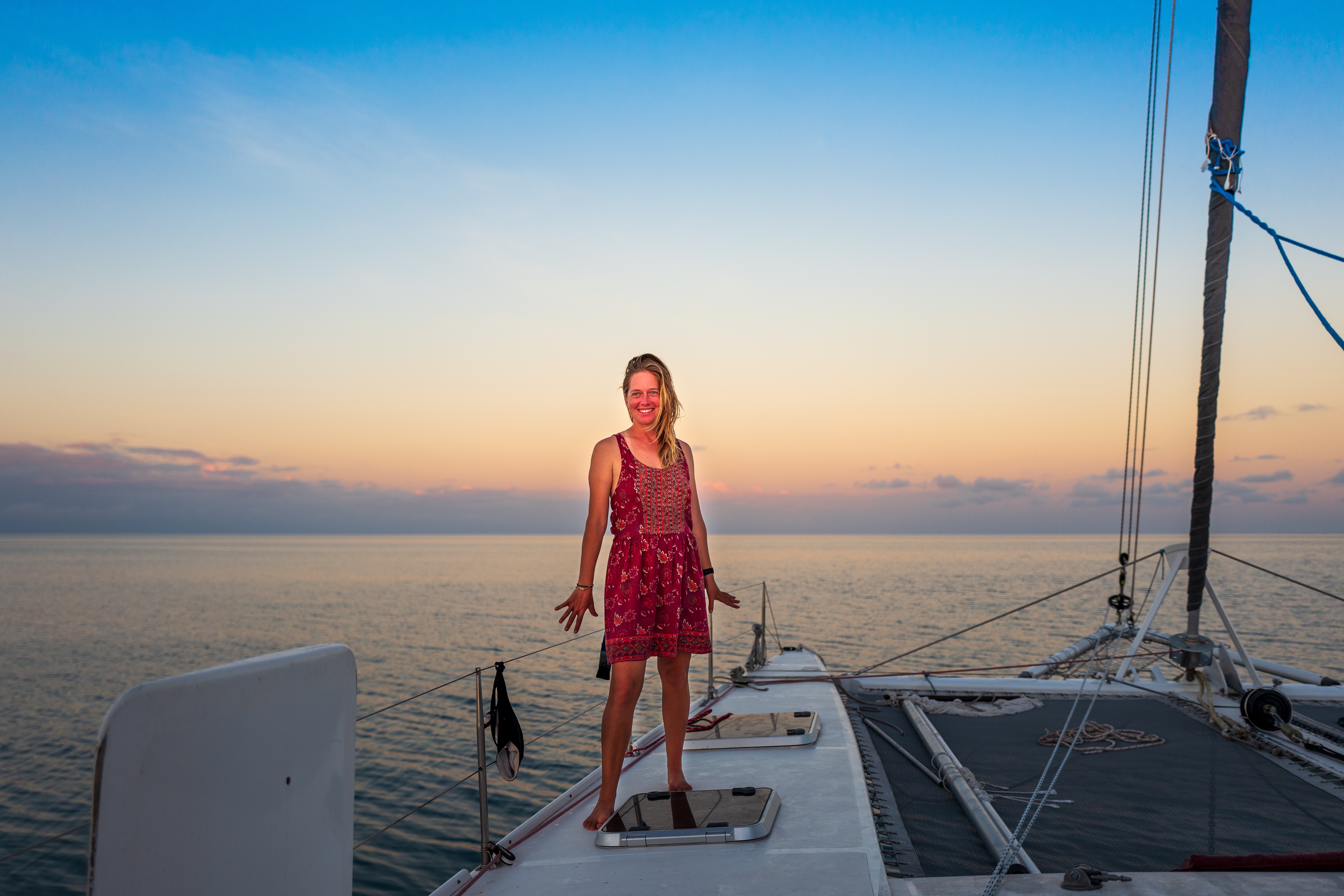 We explored the lagoon over a couple days—rode paddle boards behind the dinghy, tromped around the tiny islands to chase fish in the shallows, listened to tropical birds sing and laughed our faces off joking around with each other.  John had a plane to catch so we dropped him off at the Rangiroa airport and sailed on towards Moorea.

It was a rough multi-day passage with large swells and stormy skies. I felt sick and got into my grin and bear it mode. Finally, we came into a beautiful long bay in Moorea, the neighbor island next to Tahiti.  We went on an all day hike up to Belvedere point, through lush tropical rainforests, past pineapple fields and rushing rivers. It always feels good to walk on land again after time at sea, your muscles have to remember what to do. We visited an an archeological site in the jungle to learn about the traditional culture before French colonization.  Tahitian men used to compete in archery competitions in narrow cleared areas in the forest. Boys sat up in the trees and hollered as the arrows went by them so a winner could be determined.  We walked back down the mountain amongst the free-range tropical chickens, and knew we should eat soon since Eric was contemplating taking a bird home for dinner. We ate at a cozy French restaurant called Rudy’s—lettuce (!) salad with baked goat cheese, tuna tartare with fries, papaya and pineapple tart. 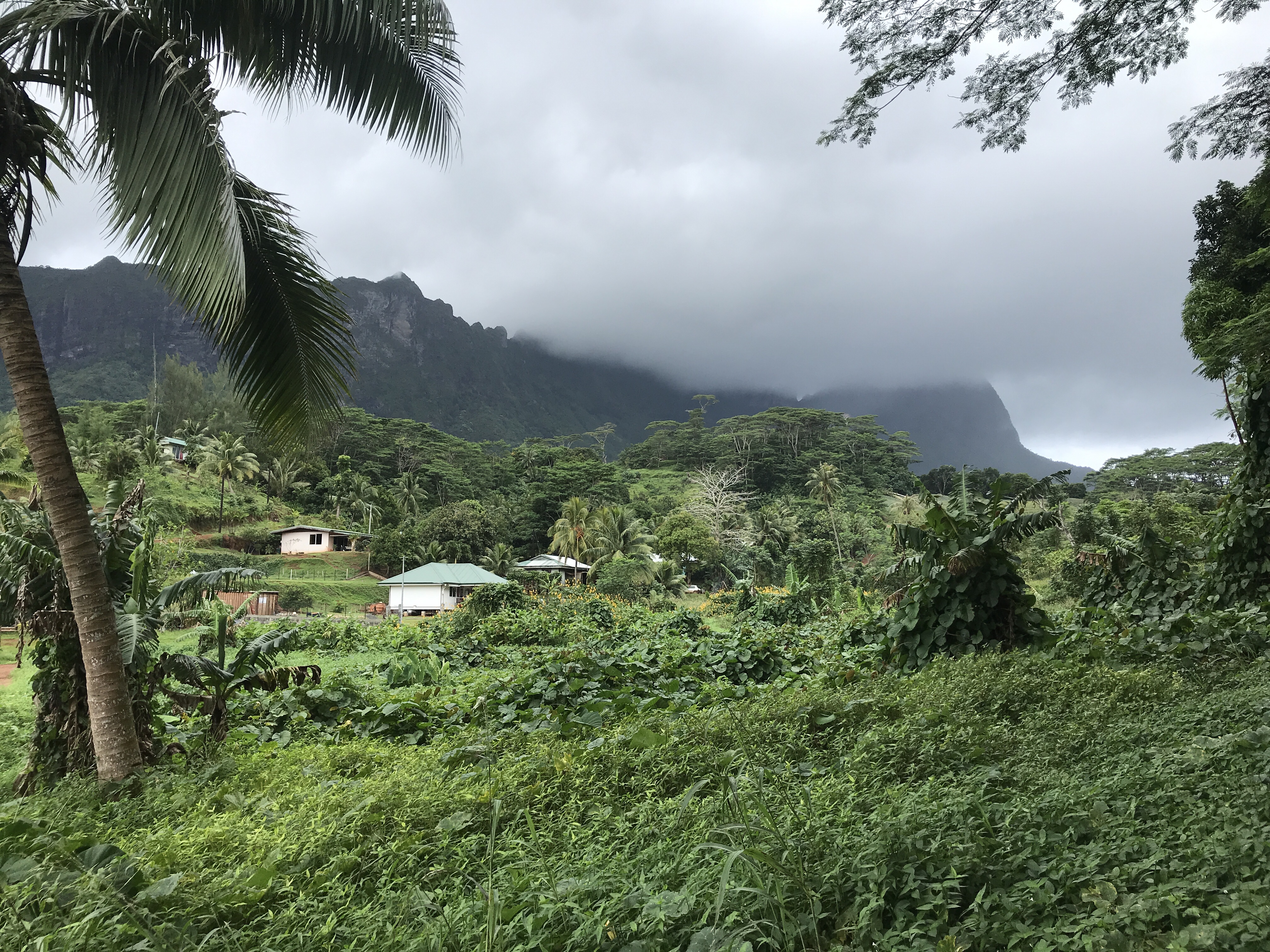 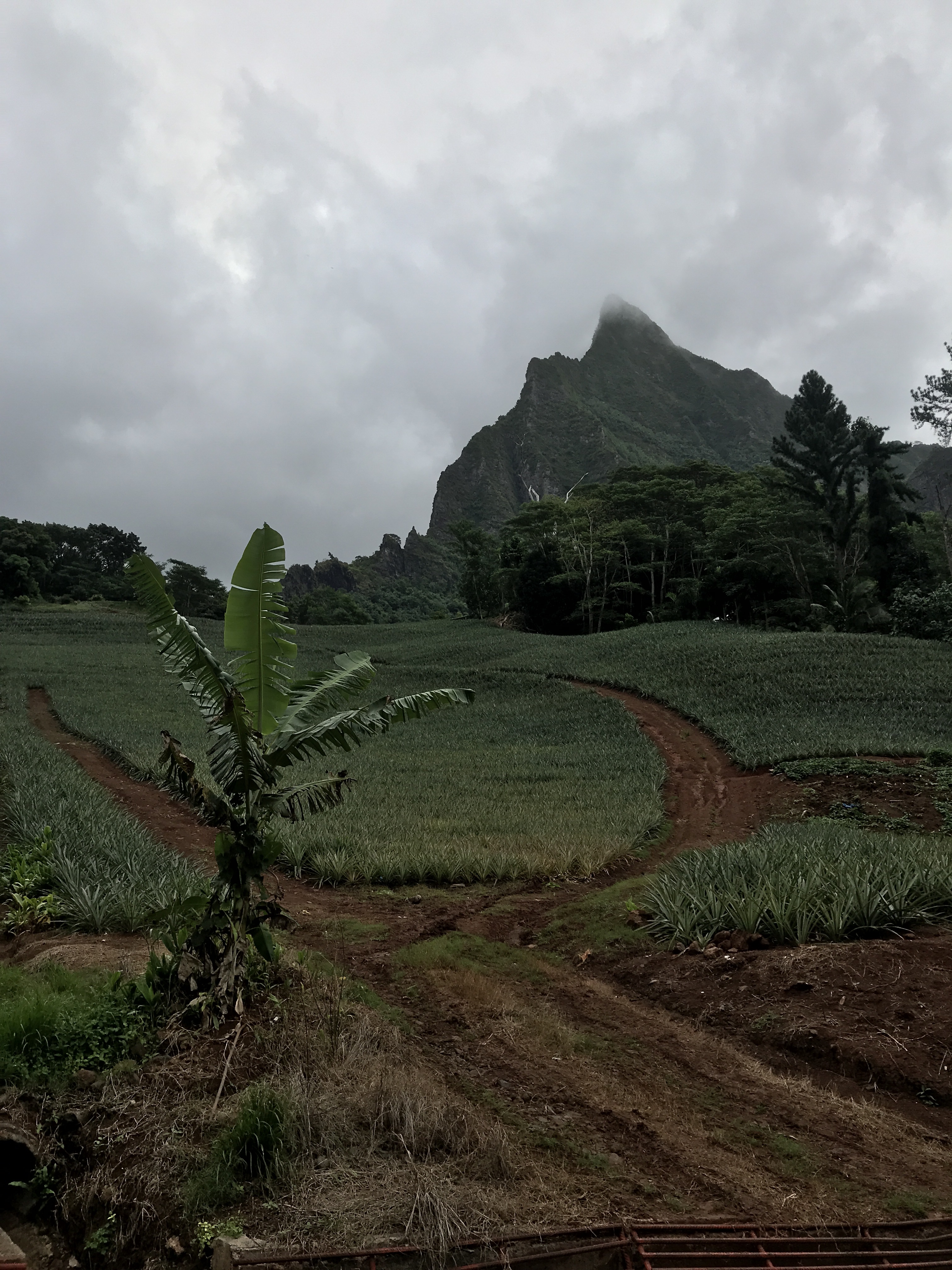 Morgan and I felt pure bliss shopping at the supermarket near the anchorage—they had reasonable prices for fresh vegetables and a huge selection of stinky French cheese.  In the Tuamotus, one cabbage went for $12, now we could buy apples, zuchinni, carrots, spinach, bok choy and more without blowing our travel budgets.  My body could finally get the vegetables and fruits it wanted.

One day winds gusted at 40 mph so we stayed on the boat.  We took the opportunity to cozy up and bake a chipotle chicken casserole, read and rest.  Then it was time to say goodbye to CJ and River for a few days, we needed to pick up Eric’s sister and her husband in Papeete. It was a different style, cruising on a schedule, but it was fun to be social again and meet new people. Plus, I hadn’t been to a “big city” in a few months. Papeete promised tantalizing treats like restaurants, clothes shopping and the specific pleasure of walking unknown streets.

We crossed stomach churning mixed seas for a few hours to get to Papeete in time. I just focused on the horizon and couldn’t even turn to look at Eric in the captain’s chair while we were talking. Tahiti’s voluptuous green hills filled our field of vision, it reminded me of the big island of Hawaii’s topography. We passed women and men paddling outrigger canoes, freighter ships loaded down with containers and fancy hundred foot long glossy yachts.  Eric parallel parked in the last free spot at the marina’s guest dock and we went ashore.

Papeete is not a beautiful city. It is a jumble of concrete block buildings, rushing traffic along the ocean front and as you wander to the lush jungly outskirts, poverty shows its fangs.  It’s saving graces are the large airy central market, gorgeous murals and generally kind people, who come from all over French Polynesia. Men wear intricate basketweave style tattoos on their forearms and calves that follow their muscle arcs. Women wear airbrushed large flower pins behind their ears, one side indicates you are single, the other that you are coupled (I can never remember which side is which). Black pearl jewelry drips from their necks, adorns their fingers and earlobes. 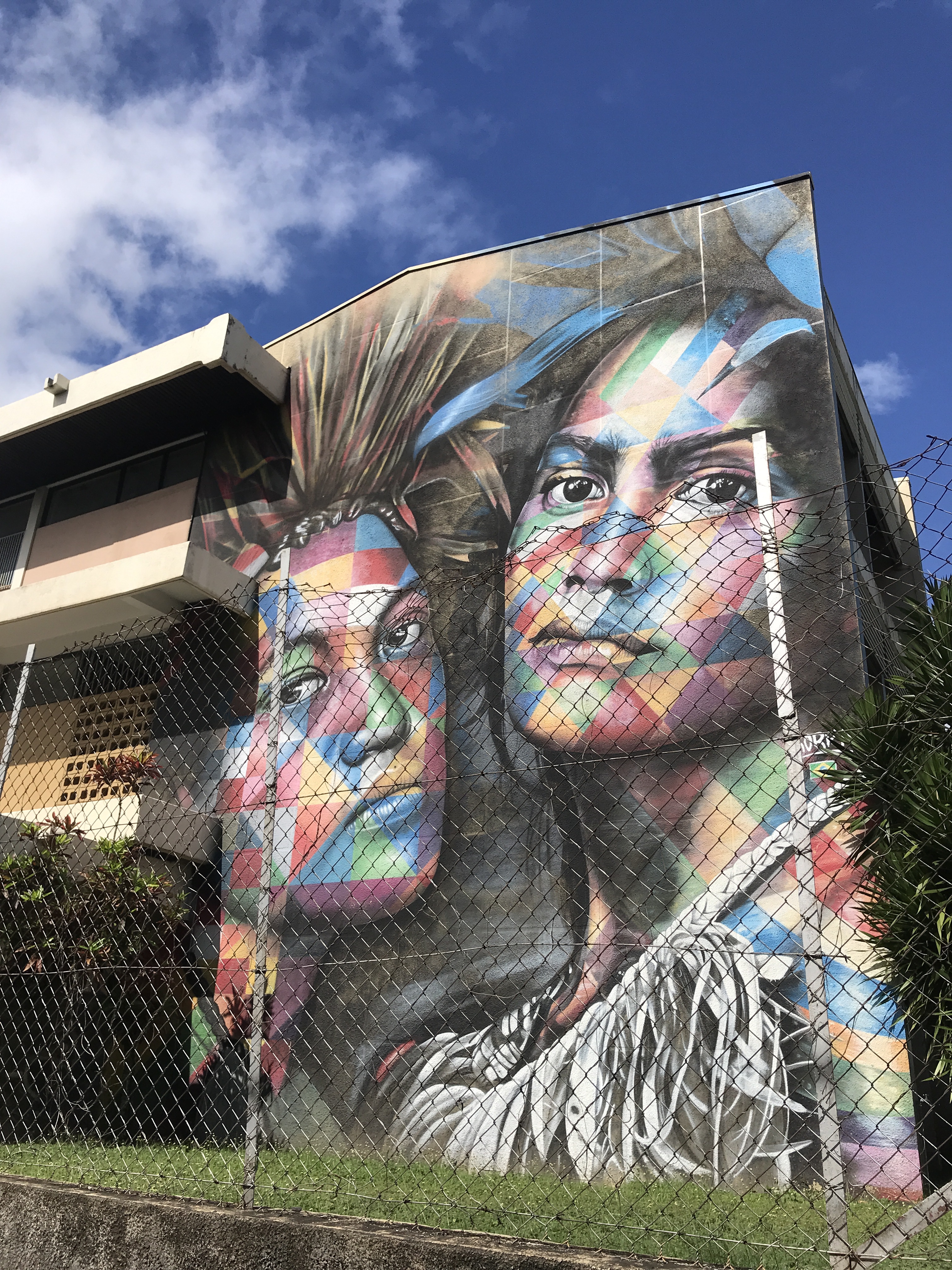 I peeled off to wander alone and enjoy the city night sounds and sights. Past the packed well-lit McDonalds, I found an old-school French style food wagon in a shadowy park. Two older women proprietors looked at me suspiciously, but I disarmed them by ordering a giant serving of chocolate ice cream and an iced pineapple juice.  We all silently watched a disco musical theatre performance on a small TV hung inside the dollhouse-like wagon.

Morgan and I went clothes hunting in the well-stocked, high priced surf stores on Papeete’s main shopping street the next morning. I’d worn the same pair of board shorts everyday for three months and was motivated by the fear of what would happen if I lost them and didn’t have a backup.  After a few hours of trying on ridiculous too short women’s shorts, some made from crushed velvet (why), Morgan said I should try on the men’s board shorts. Brilliant! They were the right length to move around it, super stretchy and had amazing artwork. I bought a pair of Billabong wonders with a neon rainbow serpent head on one thigh and an all-seeing radiant eye on the other. A perfect 30th birthday present to myself.

We picked up Eric’s sister and her extra tall South African husband. They were both lovely to hang out with, funny and relaxed, intelligent and humble.  Plus, they brought suitcases full of chocolate for the boat.  Hearing about life back home reminded me how lucky I was to have so much free time to adventure. They were in the daily Silicon Valley grind which I didn’t envy at all.

Our visit coincided with the annual Heiva festival, a multi-day cultural dance and song competition that showcases artists from across French Polynesia.  We went to the opening night and the energy in the outdoor arena made my heart pound.  The dancers wore incredible costumes made from natural materials—shells, fresh and dried palm fronds, flowers, leaves. One dance story was about a man and a woman’s friendship being interrupted by the man’s selfishness which he eventually overcame and learned to respect her.  The dancers were not that compelling talent-wise, but the costumes, storyline and pageantry made up for it.

Zephyr scooted back over to Moorea, this time with easy seas and sunny skies. We went on the long hike again, hung out with the plump cat at the Bali High Club then cruised over to a neighboring anchorage that brimmed with sailboats.  It was gorgeous—volcanic spires covered in tropical green, with elegant milkwood trees casting their delicate shadows across the steep cliffsides.  A totally different environment than the flat atolls in the Tuamotus.  I met a great, sandy colored boat cat named Duna and her French young couple parents. I like most cats, and boat cats are an especially fun surprise. 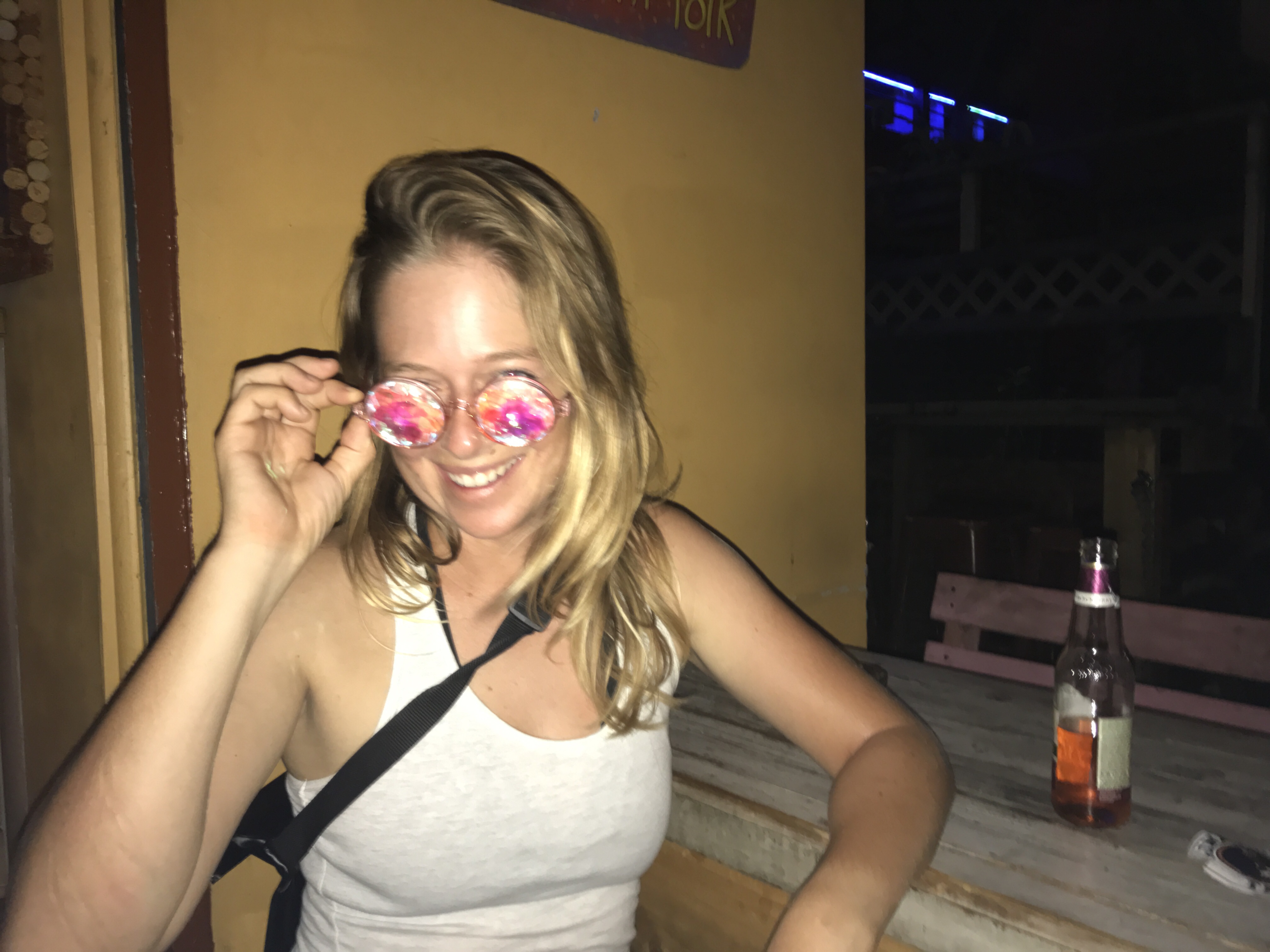 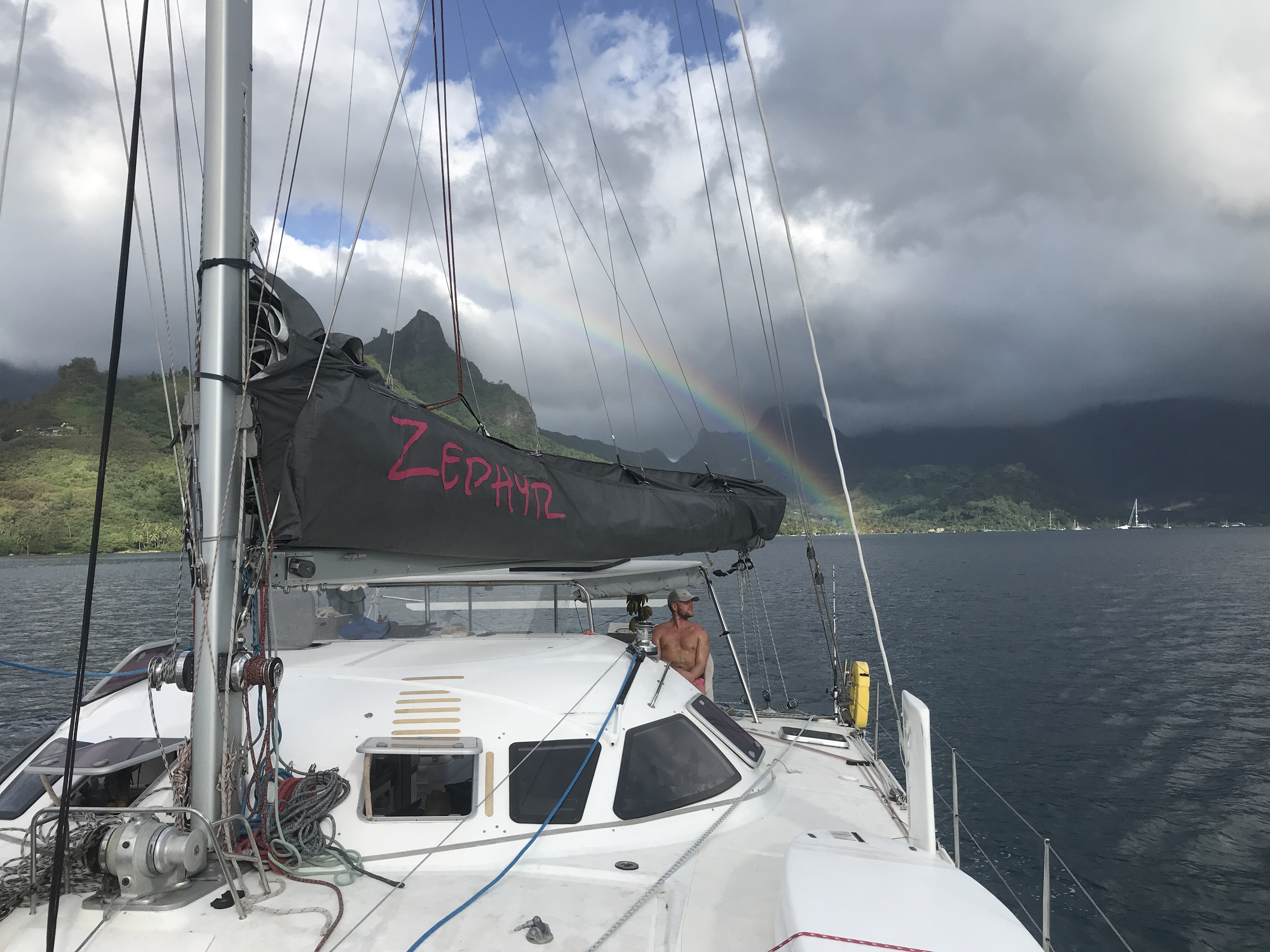 In the morning, we dinghyed through a dredged passage along the outer reef to the InterContinental Hotel.  Tour operators come to this area to feed large stingrays and sharks, it felt like Disneyland by the time we arrived, crowded with tourists and GoPro cameras. The rays were three to four feet across with thick wings and a prominent stinger. I didn’t feel comfortable hand feeding them fish and even more uncomfortable around sharks in hunting mode, so I stayed on the periphery.  As I snorkeled through the reef, rays and sharks came by and surprised me, it felt better to see them fly through the water, away from the hubbub. 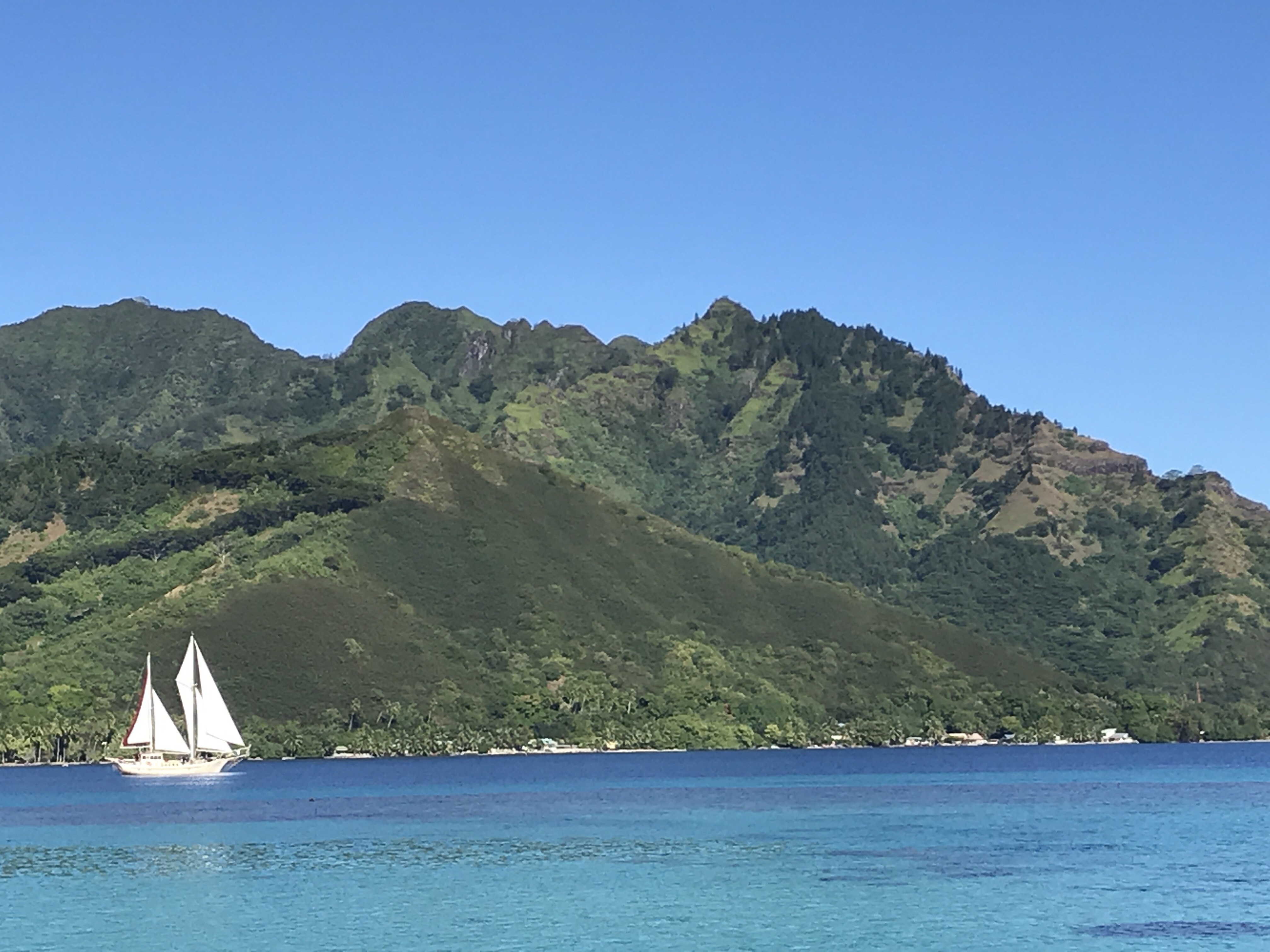 After the group feeding, we tied up at the hotel to poke around. It was luxurious, especially the lobby, strung with rustic elegant shell chandeliers, queenly bent cane chairs and dark wood paneled everything, even the bathrooms were air conditioned and full of fresh cut flowers!  But they also had a caged off dolphin area where three dolphins swam in circles, pacing.  Not magical at all.

That night I stayed at CJ and River’s AirBnb cottage because I needed to catch the ferry early in the morning to Papeete. I was flying to Rarotonga in the Cook Islands to pause my French Polynesia visa.  US citizens get 90 days in French Polynesia, and since Zephyr arrived a few weeks after me, I needed to leave and come back to join them onwards for New Zealand.

I took my first hot land shower in months.  We decided it was a perfect rainy movie night, and drove to the corner store to buy all kinds of cookies and gummies.  I fell asleep on the couch, grateful to be in the company of good friends with a full belly, nourished in body and spirit, ready again for a new solo adventure to a place that I had hardly researched. A tropical island with a backpacker’s hostel? Let’s go.